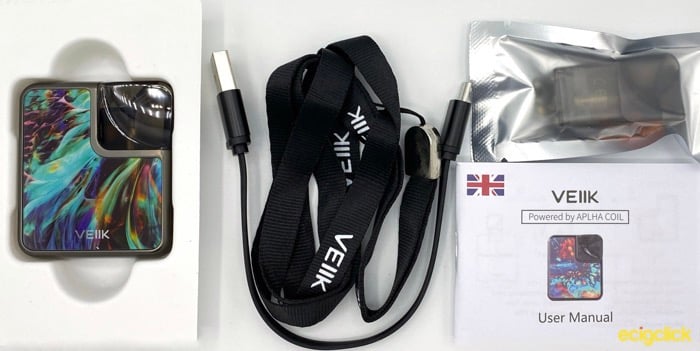 This is a dinky little kit, and I actually found myself using the lanyard that it comes with, if only so that it wouldn’t disappear into a deep pocket or bag!

Although it’s quite small, it’s got a reassuring weight to it, undoubtedly helped by metal frame and the 500mAh battery they have somehow squeezed in. 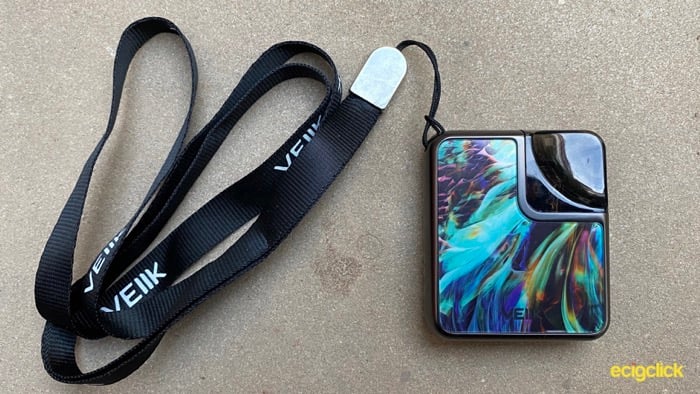 It comes in a few colours, either a PU version in Plain Black, Elegant Brown, Emerald Green or Vitality Orange. Or a glass version (for the side panels) in Dazzling Black, Ocean Blue, Colour Ink, Fantasy Gold, Idyllic White or Aurora Gunmetal.

I was sent the Fantasy Gold and Aurora Gunmetal to review, though it was only the gunmetal that came on holiday with me.

The body of the kit is a rectangular, but it feels more like a square, with one corner cut out for the pod itself.

On either side you have a glass panel (on the glass version), with a beautiful printed pattern dependent on your colour choice.

You can tell it’s printed if you look closely, the give away being that both sides are identical.

It is a really beautiful device to look at, and my pictures don’t do it justice.

The glass panels are lovely, and the branding is minimal, with just the company name printed at the base of the panels – silver on the glass version, black on the PU.

Wrapping around this panel the frame is made of metal (zinc alloy), and will be a different colour, depending on the overall colour of the system.

The bottom edge has your micro USB port for charging. The long side has the name of the system, and the regulatory marks printed in silver, as well as the hole for the lanyard at the top.

The markings are a bit obnoxious (and slightly askew) but they have to put them somewhere I guess! Despite being a square design, the edges of the kit are nicely rounded, making it very comfortable to hold.

The pod is made from PCTG, so it should be fairly resistant to most e-liquids.

It is however a little challenging to see your e-liquid levels, being smoked and also having a slightly odd design due to the mouthpiece, so expect to be taking your pod out to check!

It slots straight into the square body on one side, with the mouthpiece being a corner of the square.

It’s snaps into place with strong magnets, and shaking it, I couldn’t get it to move or rattle at all. It’s a slightly flattened mouthpiece, and although it’s relatively comfortable, it felt slightly odd to vape on.

Purely psychological, but the square shape of it, with the mouthpiece on one corner, is just a little weird to me!

There’s only one type of pod available for it currently, but VEIIK gets a thumbs up from me for including a second one in the box!

The coil inside is a 1.2Ω ceramic coil, and we shall have a look at how it performs later.

How To Fill The VEIIK Cracker Pod Kit

The VEIIK Cracker has one of the easiest fill plugs I’ve come across, the orange silicone extends out quite a long way, so there’s plenty of it to grab to open your pod.

I wish more companies made it this easy!

This is a draw activated device, so no controls and the power will depend on how much battery you have left.

You do have a tiny bright LED that will tell you your charge level. This is on the shorter ‘side’ that has the corner cut out for the pod, and it also has an airflow hole.

How Does the VEIIK Cracker Pod Kit Perform?

One thing to note straight away, is that while this feels like it should be a pure MTL device (low wattage, high resistance, small mouthpiece) I actually found that the airflow sensor required quite a large amount of airflow to consistently fire.

Because of this I have been using it more like a very restricted direct to lung device, as I found that otherwise I kept noticing the LED flickering as it made up it’s mind whether to fire or not.

I tested this behaviour with both kits I was sent and they performed identically.

There’s no adjustable airflow here, which you can understand given it’s size.

However due to the temperamental nature of the firing, I wish it were either more responsive, to allow a true MTL, or had more airflow, to make DTL a little easier.

As it is, it manages to not really be either.

You do get a surprisingly decent amount of vapour from it, but with a tiny ceramic coil, it doesn’t manage to be terribly thick.

I’ve never been a big fan of ceramic coils, and I’m sorry to say that this one isn’t going to change my mind.

Loaded up with my normal 50/50 Berry Ice by Vape Simple, I just wasn’t getting much of a flavour hit from it.

On the plus side, the flavour that it was producing lasted forever.

Aside from testing out some different e-liquids in other pods, I have been using the same one for over a week.

It barely sips the juice, and I haven’t noticed any drop in flavour yet.

I’ll be honest, it’s been hard to do a decent amount of battery testing on this because I generally would reach for something else first!

However, to make sure I did my job as a reviewer, I took it out with me as my only device for a couple of days, and I was able to get just over a full days use out of it.

If you use it as a backup device, and you’re only vaping on it between other things, then you’ll probably manage 2 or 3 days without too much problem.

Charging is speedy enough, getting a full charge in a little under an hour.

So, it’s another tiny little pod, but does it do anything to make it stand out?

When I’m looking at a pod kit, one of the most important things to me is flavour, as I will often use them as a backup to my re-buildables.

The Berry Ice that I use for testing all pod kits is a particularly strong e-liquid, with a very distinct flavour profile.

Putting this into the cracker, I was let down by how muted everything became, and although I got a decent little cloud, the flavour just wasn’t up to the standard that you can find elsewhere.

My other big criticism of this is the way that the airflow switch has been tuned.

If it activated more easily, then I could still see me taking this out when I needed something small and discrete, loaded up with high nic e-liquid.

However, because you need to pull quite a lot of air through it, I just feel like that is going to lead to a headache sooner rather than later!

Select your currency
AED United Arab Emirates dirham
USD United States (US) dollar
× How can I help you?